Jura is well known for its luxurious products on the market. Their products are durable, long-lasting, and reliable; it’s the same for E6 and E8. Jura’s espresso machines are one of the top ones in the market. So, picking a winner for the same brand is quite hard.

Anyway, I still found the Jura E8 to be slightly better than the Jura E6. So, let’s see.

Why is Jura E8 better?

You may find it unreasonable for Jura E8 to be so more expensive than E6. But the E8, a newer model, offers different commodities that make it worth the price you are paying.

What Are the Similarities of Jura E6 Vs E8 Coffee Machine

Both E6 and E8 have the Pulse Extraction Process(PEP), which ensures a barista-like flavor from your coffee. Theoretically, in this process, the machine forces hot water to go through the ground. As it occurs very quickly, the method improves extraction time and offers a fully developed flavor.

This technology is standard in every E lineup and only one of its kind currently in the market. Without that, you see their similarities in appearance too.

They have a similar sleek and modern look. Constructed materials are also top-notched. And, the user interface is clean and beginner-friendly for both models.

Both of the machines come with a faster grinder and can produce several types of beverages. Their water reservoir size is similar. But, the water tanks are somewhat small for commercial use, only 63 oz. Thus, make them suitable for personal, and home uses. But, you can use them in your small office if there’s not much of a crowd.

Finally, Jura’s recent addition, the Smart Connect Tech, is available with both models. This technology gives you control of your espresso machine via smart devices. The machines are now compatible with Bluetooth connections. You may also consider what others saying about Jura D6 vs E6 also the recent popular one Jura s8 automatic coffee machine.

What Are Differences Between Jura E6 Vs E8 Coffee Machine

The espresso machines use the industry’s one of the best in-built grinders – Aroma G3 Grinder. This grinder cuts beans in a way that keeps the fragrance and flavor of every coffee ground.

Despite the grinder being the same, Jura E8 has something additional to provide the upper hand. Both models use whole beans to make coffee. But the E8 is capable of using pre-ground coffee. Additionally, the Jura E8 has a pre-grinding technique to provide a bypass for the pre-grinding process.

Those functions are not available with E6. But, you can buy a separate built-in grinder if you want the same feat.

Jura E8 and E6 both offer a range of coffee drinks. And, you can adjust the coffee strength and water amount of your coffee with both models.

Although the water level is pre-programmed, it is changeable according to your taste. There are eight levels of coffee strength levels with both machines.

You can make seven specialty drinks with Jura E6, which includes espresso, coffee, and cappuccino. On the contrary, the E8 offers 16 specialty drinks, including espresso coffee, latte, macchiato, flat white, and many more.

As I mentioned before, the machines are user-friendly and relatively easy to use. They have front-facing buttons with a color display, which is quite simple to operate.

However, Jura E8 has one unique feature which gives it an upper hand – one touch cappuccino option. This feature allows you to make cappuccino, flat white, or macchiato with just one touch. The drinks are pre-programmed on the device.

Moreover, the smart connect option, which presents in both machines, is also excellent. That allows users to connect with the devices via Bluetooth.

There are also some minor differences in those coffee machines, as the water reservoir capacity. The tank of E6 can hold slightly less water than E8. The Jura E8 has a 64-ounce water tank, whereas the E6 has 63 ounces.

The bean hopper has a tiny difference too. Jura E8 can hold 10-ounce coffee beans opposite the 9.9-ounce bean hopper of E6. Although these differences are nothing to mention, they still exist.

The Jura E6 and E8 belong to Jura’s E-line super-automatic espresso machine series. With the swiss quality and functions, they are one of the best on the market. So, it is obvious for them to be expensive.

The E8 is relatively new and is made with recent technology compared to the E6. So, it is also more expensive than the E6. You need to spend an extra $300-$600, depending on market conditions.

FAQs About of the Jura E6 Vs E8 Coffee Machine

What temperature is coffee extract?

The machines brew at 175 degrees F.

Is removing the water reservoir hard?

No. The reservoir is on the left side and is easily accessible. You can even fill it while on the machine.

Does the Jura E8 make Americano in one-touch?

Technically, Americano is espresso with hot water on top. The E8 is the only espresso machine that can brew an Americano in one touch.

Do oily beans clog the grinder?

Yes, they sometimes do. I would recommend you avoid using oily beans in a Jura.

What is the maximum it can brew for a single cup?

So, which one should you choose? For me, the E8 was better as it has new technologies and is also more convenient. I especially like having more drinks options on hand and also the one-touch function.

But, that does not necessarily have to be the same for you. E6 is more straightforward and cheaper. But keep in mind that you can’t use pre-ground coffee beans with it. If everything is well with you, then picking E6 is incredible. 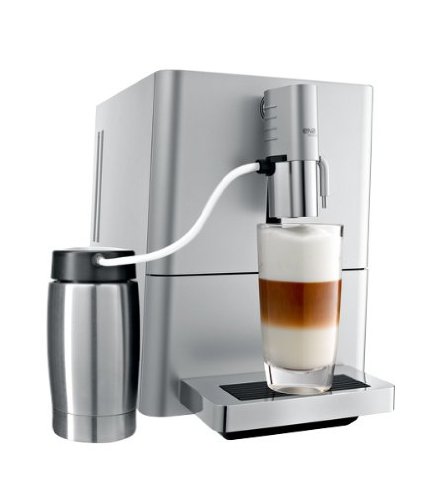