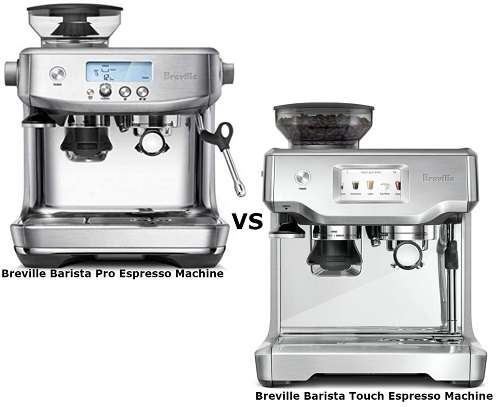 Why is the Breville Barista Pro Better?

Both of these machines share quite a lot of similar features and actions. But despite their targeted users are a little different. Thus has some differences at the same time. The first noticeable difference is in price. Barista Pro is a lot cheaper than Barista Touch, even though both of them are equipped with a built-in grinder. Without that, Touch has a touchscreen display (as its name says), Barista Pro comes with button control.

There are several other similarities. Let’s dive deep into the similarities and differences of Breville Barista Pro vs Touch –

Both of the machines look handsome and available in brushed stainless steel exterior. The Touch also can be found in matte black and The other has several color options. However, the silver one is the most famous for both machines.

The machines have identical size factors with just a slight difference. What the difference could be? The Barista Touch is weeder than its depth, while Pro is deeper than its wide. Overall both seem similar. But the biggest noticeable difference between them starts with the display. So, let’s see how different –

Both of them come with respectively amazing displays. As Barista Touch is modeled by minding the beginner in the head, it is more automated, simpler to use, and pre-programmed with popular recipes; ready to shoot by just your finger touch. And, also you can customize them according to your need like controlling the volume of the coffee, the coffee strength, milk texture, and temperature.

On the other hand, Barista Pro offers more controls. You don’t need to make coffee blindly anymore. As the display allows you to see the coffee machine progress. With it, you can sit and watch the grind size, measure the coffee grounds and the temperature of the water, and many more. All details are bold in the display and you can see them clearly as it is amplified by a backlight.

For many people, their days don’t start without ‘that’ sound coming from the coffee machine. The burr grinder is known for its superiority in grind size and flavor. And, if you have a built-in grinder with your espresso machine, you don’t need to worry about buying separately with extra money. Moreover, the process also becomes easier and faster. The Breville Pro and Touch both come with their built-in grinder. And, their qualities are also the same.

For a high-quality coffee, you need to take notice of many things. One of these is the water temperature. Many espresso machines fail to produce quality coffee because of this. But both Breville Barista Pro and Touch are not on that list. They equip with digital temperature control features, allowing you to get the right temperature for the coffee ground. Moreover, it also shows you the temperature you need.

The overall performance of these two machines is similar. Both of them use Breville’s ThermoJet heating system. With this technology, Breville pro reaches optimum extraction temperature in 3 seconds. This means if you have just flipped your machine, it will be able to give you a cup within 30 seconds.

The grinder of both machines is quite similar too. They provide enough power necessary to grind espresso shots. But, you’ll notice some differences in their appearance as some of the parts have improved in Breville Pro.

The price of Both machines is relatively high for home espresso. But, they are high-end home espresso so it is considerable. However, there are a couple of hundred bucks difference between Touch and Pro even though both come with a built-in grinder. The touch cost much because of the touch screen, and pre-programmed recipes.

Q: What accessories does this machine come with?

It comes with all accessories you need, like 1 or 2 cups, filter baskets, stainless steel milk jug, cleaning kit, and so on.

Q: Does this machine have a Double Boiler?

No, it’s a single boiler. But it has a ThermoJet feature, which heats it in 3 seconds. Literally, just turn the espresso on, in a few seconds, the espresso is ready and making steam. Thus it acts as a dual boiler.

Q: Is Barista Touch a replacement for Barista Express? Or is it a higher-level machine?

It is a higher-level machine. It got several upgrades as the touch-screen has gone through a drastic improvement, the steam wand has been upgraded, as the same time heating system also changed.

Although I recommended Barista pro, there is no denying that both machines are top-notch espresso machines for espresso lovers. For their compact design, they are a fine choice for anyone who has limited counter-space but wants a ‘real’ espresso.

But which one should you choose in the end. And, price most likely doesn’t matter if you are looking for convenience or quality or both.

You should go with Barista Touch if you are a complete beginner and don’t want to learn those hard things. This machine is easy to use, the touch screen is user-friendly, comes with pre-programmed drinks and instructions to guide you. Thus, it becomes one of the easiest espresso machines.

But definitely choose Barista Pro, if you want to control your drink. In this case, you may already know how to pull a shot and that or are willing to learn those stuff. This machine handles all the messy parts for you and offers you more control over your drink. 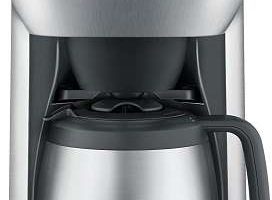 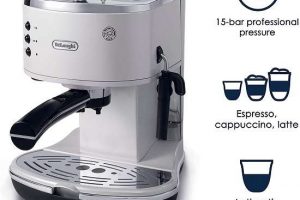 Delonghi ECO310W Review – why its best for single & double shots? 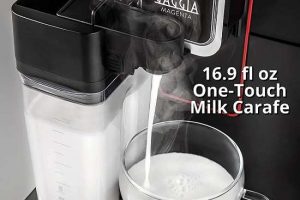 Gaggia Magenta Review – What premium specialties include in it?